Do you live in ND? Would you like to save $5 on tickets to the Barnum and Bailey Circus at the Bismarck Auditorium September 28-30? Click HERE for the coupon to SAVE!!! Coupon Code is: GOLD 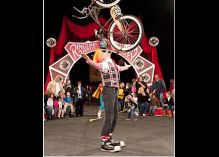 Ringling Bros. and Barnum & Bailey Presents BARNUM BASH introduces the Ringling Bros. Ringlettes, who are the stylish hosts of the swankiest circus party in town. The Ringlettes are ready to invite Children of All Ages in on the hippest circus spectacular that The Greatest Show On Earth has ever produced!

The fun begins as soon as the audience enters Ringling Bros. Presents BARNUM BASH with a rockin' Pre-show party happening directly on the arena floor. Party goers can learn fresh dance moves from Ringling Bros. clown DJ Dean, style in glitzy costumes, learn balancing and juggling skills, meet and take photos with circus stars, and even step behind the curtain for an exclusive backstage experience which includes an up-close look at the most exotic animal menagerie only at BARNUM BASH.

Ringling Bros. Presents BARNUM BASH has assembled the most amazing international acts including The Mighty Dmytrio, Motorcycle Mania, Epic Asian Elephants, Wheel of Steel, and Hand Balancers. All are tricked-out for the circus party and ready to perform wild feats of wonders and strength, to contemporary pop music and in 21st century Barnum style. Everyone who is anyone is invited to the party, except Anton, a loveable, goofy hipster clown, who just wants to be part of the fun. Ringling Bros. Presents BARNUM BASH is all the rage with outlandish thrills, hilarious high-jinks and majestic animals, but can Anton, with his non-stop laughable antics, persuade us all that there's not just one right way to party!?!   Save $5 Off Tickets Use code: GOLD