The Hobbit: The Battle of the Five Armies Giveaway

A brand new giveaway! Today we celebrate the release of the final installment of The Hobbit on blu-ray and DVD! We love this movie and it is a MUST to add to The Hobbit collection! You can win your own be entering below! 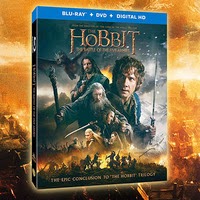 From Academy Award-winning filmmaker Peter Jackson comes "The Hobbit: The Battle of the Five Armies," the third in a trilogy of films adapting the enduringly popular masterpiece The Hobbit, by J.R.R. Tolkien. "The Hobbit: The Battle of the Five Armies" brings to an epic conclusion the adventures of Bilbo Baggins, Thorin Oakenshield and the Company of Dwarves. Having reclaimed their homeland from the Dragon Smaug, the Company has unwittingly unleashed a deadly force into the world.
Special Features on the Blu-Ray combo pack include: