If you are a fan of our Facebook page, you know we have been warning you about Bluum for a while! We posted back them WAY back in May 2012:
http://www.mamabreak.com/2012/06/may-bluum-review.html
Last year, Bluum promised a "new and improved" box. And they started charging more.
Then, we started hearing from fans that Bluum was charging people's cards after they had cancelled. Bluum was sending emails to update accounts that were supposed to be closed. And then, last month, Bluum acquired Stork Stack. This is a company that people need to be aware of! That people should know NOT to give their credit card to---EVER!!!!! I have heard from about 20 people now that their accounts have been charged from subscriptions that were cancelled over a YEAR ago!!!! This includes both Bluum accounts AND Stork Stack accounts!!! Many, many people are reporting this. PLEASE contact Bluum and let them know this is unacceptable!!!!! We were not charged again on our credit card, but I can only assume it is because we have replaced our credit card since that time! This is the email one customer received after complaining about having an unauthorized charge on her credit card for an account cancelled more than a YEAR ago: 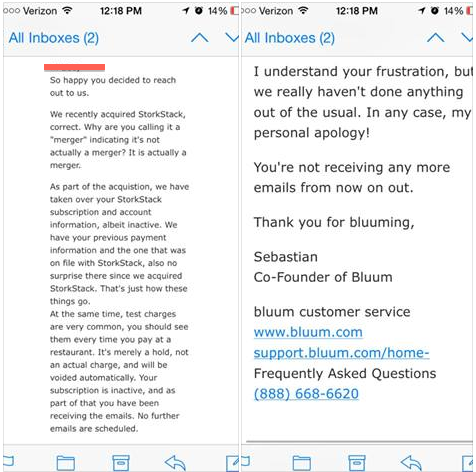 We thank our MamaBreak fan for sharing her reply email!